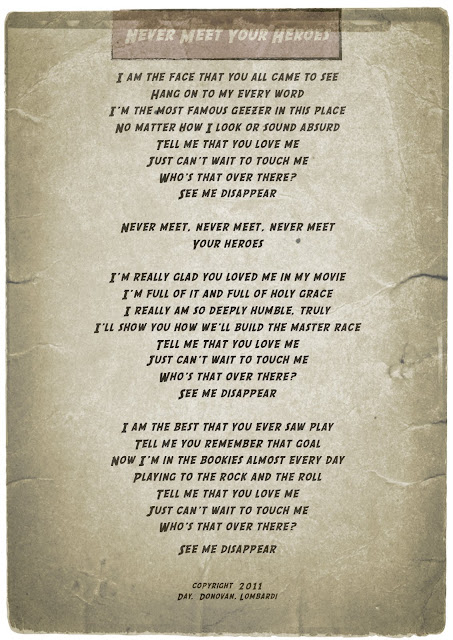 This is one of our newer songs that we've just recorded for the second EP. I'm really pleased with it. It's got all the stuff I like. A building drum intro,  fast pace, a bit of football terrace in the chorus and has a short (and rather good) bass break. Musically I'm really pleased with our playing on this. The energy is really captured well.
As for the words.....
The title was suggested by my old school mate and drinking partner Peter. It's a phrase he's often said to me so it seemed rude not to use it.
The middle verse was allegedly inspired by reading about one of Mel Gibson's plot losing moments. The other two verses? Well they're about people I've met. But we'd better leave it at that.
I well remember being deep in conversation with somebody reasonably famous and then noticed them scanning the room behind me and cutting me dead mid sentence and walking off when they spotted another celeb to talk to. Sam came up with the lines 'Who's that over there. See me disappear' when I told him.
For non Londoners and people who haven't seen Mary Poppins or Only Fools and Horses, the 'Rock and Roll' is the dole (unemployment benefit). I hope that's clear?
Posted by Ad Jetsonic at 5:53 pm 2 comments:

Email ThisBlogThis!Share to TwitterShare to FacebookShare to Pinterest
Labels: lyrics, the Jetsonics

Burn Burn Burn was probably the first completed and recorded Jetsonics song. We had just started the new venture and Sam had this great tune all worked out. Dave and me got to do our little drum and bass thing. There's even cowbell!
From memory we were booked in to record on Monday and we had this tune but no lyrics. On the Friday before I decided I'd better try my hand at writing proper lyrics. I was listening to a rough demo of the tune and wracking my brain for ideas with no luck. I decided to ignore it and or some reason ended up looking through a copy of Classic Rock Magazine. I never buy this normally as classic rock doesn't really get me going. Anyway. In between all the articles about recording Led Zep III,  somebody from Motley Crue not remembering the 80s and why Pink Floyd Don't talk to each other there was a re-print of most of  Charles Shaar Murrays rather good early 80s NME piece on Guy Stevens.
That was it I was away. I worked on a linear life in music type thing and wrote some notes. I then turned these into lyrics. These are pretty good I think. I'm not after high art but good pop/rock songs. I like them to rhyme too. You probably guessed that.
The first Sam saw of what he had to sing was when I took the printed lyrics out of my bag on recording night. Well it would have been had I not left them at home. Luckily I'd emailed them to him that day so I signed in to hotmail to get them. There was no printer in the studio so I wrote them down While they were setting up the vocal mic's. What you hear on this recording is the first ever time he sang it. We should put him under pressure more often. I think he did an excellent job.
Enjoy the video. Filmed on a budget of precisely nothing but time.
If you want to buy it get our Mustard EP. Go get it on Amazon or itunes. There's 3 other great tracks recorded later in a proper grown up studio with knobs and dials and everything too...
Extended Player No 1 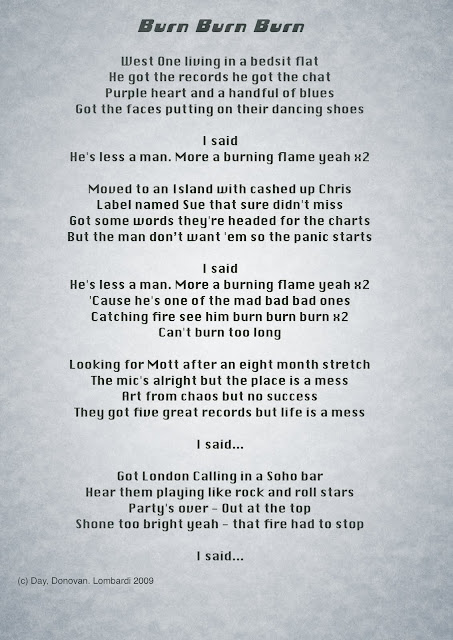 Email ThisBlogThis!Share to TwitterShare to FacebookShare to Pinterest
Labels: lyrics, the Jetsonics 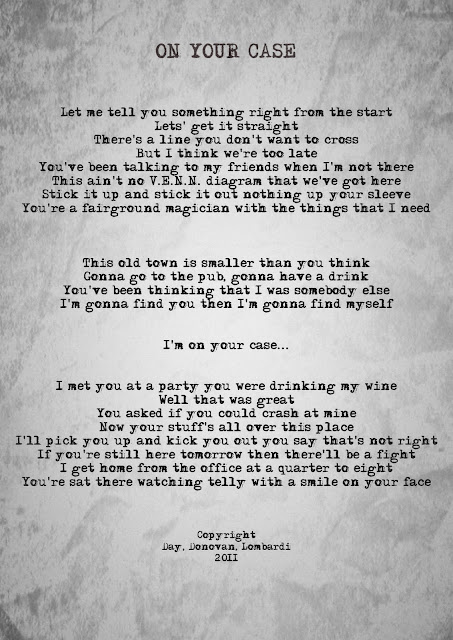 We've just finished recording this song for our second EP. It's sounding really good un mixed so I'm hoping the mixing make it a radio friendly pop hit and make our fortunes. It's a cool slab of jerky British power pop with a nice sing along bridge. It's being going down really well live since we put it in the set earlier this year.

The lyrics came about when I was having a bit of a lyrical block last year and a dearly missed poster on basschat who went by the name of 'Old Git' took an interest and suggested some themes for me to write about. The one that immediately got me going was the idea of a friend who keeps crossing your boundaries. You know the bloke who asks to crash on your sofa for a night and ends up still there several days/weeks later with gear all over your place, not doing his washing up and eating your last pork pie. I've known a few of these so it came easily. I'll have to own up and admit I've been that bloke myself back in the day too.
As usual with the Jetsonics the lyrics were a team effort in the end. Sam got the blue pencil out and edited them and hugely added to them. Plus they were shaped by Dave's rhythms too.
Sam and me like a bit of spelling out during a song. I was particularly pleased to get V- E - N - N diagram into a song. I like the imagery of that even if no one else has a clue what it's about.
Mixing and EP should be finished by the end of September.
Posted by Ad Jetsonic at 9:44 pm 2 comments: